Comedy Online: How to put on a comedy show online using Zoom

An article that'll describe how to arrange a comedy show online employing Zoom.

Most comedians are skeptical about online comedy shows. Live standup relies on the in-person chemistry between performer and audience. The coronavirus pandemic has made that impossible. Just like other producers, all my live shows have been cancelled(Comedy Conspiracy and Comedy vs. Nerds). Now, online comedy shows are the only option for live performance. So, I decided to do a test-run of my show, Comedy Vs. Nerds over Zoom. To my surprise, the show was a big success. Because it was a success, I want to share my experience.

My biggest fear was that attendees wouldn’t laugh the way they do in a normal comedy club. I was afraid that without the social pressure of a crowd, most people wouldn’t laugh out loud. But I was wrong - they laughed consistently. I think they felt freer in the comfort of their homes. I watched an attendee laughing from his dark Brooklyn apartment, and another cackling in front of a beautiful Seattle sunset. Though there was some small latency in the audio, it was not enough to lose the feeling of a live audience.

Just like members of the audience, the performers beamed in from their homes. Again, this made the show feel more intimate. Some comedians riffed on their furniture and compared it to the furniture of attendees. Of course, the audience loved that kind of interactive attention. Other comedians leaned into the video format. Sara DeForest, a San Francisco comedian, shared her screen and presented an absurdist powerpoint.

The show lasted about 75 minutes and the audience loved every minute. A live performance, even a virtual one, is much more engaging than some random show on Netflix. After the show was over, I received congratulatory messages from some very happy customers. I went to bed with a big stupid smile.

❝ Performing on Michael's online Zoom show was a unique and fun experience. As a performer there was less pressure than a club gig. As a result I was able to be myself and tell the jokes that I really find funny. Check it out if you are looking for an exciting new avenue for comedy. ❞


❝ While performing at an online show is a bit strange, the crowds provide a lot of energy and it is nice to know that we can provide them with an escape in this strange time ❞


❝ Virtual shows work. They give comics an opportunity to try new formats and add visual components to our jokes. I had a great time performing in Michael's show! ❞ 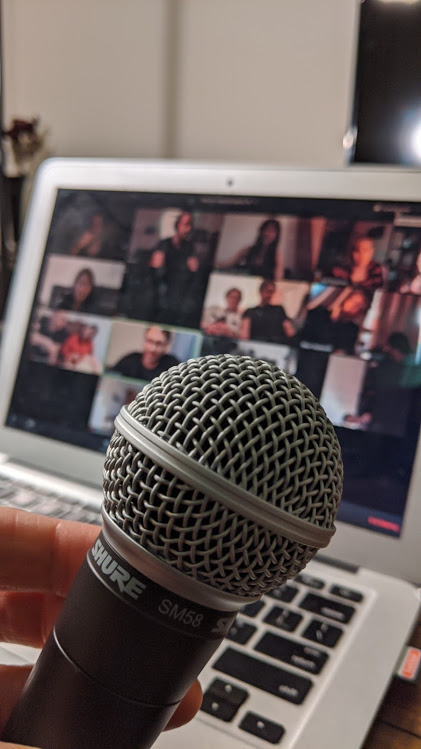 How to put on a comedy show using zoom

I tried a few different platforms and learned that Zoom has the best combination of features and reliability.

Create an event on Eventbrite

In Eventbrite, there’s an option “online event” that is location-agnostic, and people around the world can discover it. Eventbrite itself claimed that they sold 9% of all my tickets. I strongly believe that you have to charge something(at least a minimum amount) for comedy, especially online comedy. I tried organizing free events, and free online shows, but people at free events are a little light on focus, they don’t value the time. When they pay something, they appreciate it more highly. Also, comics work hard to write their jokes and deserve monetary karma.

In Zoom, create an event in advance and get the event link. Send the Zoom link to all attendees through Eventbrite (choose “email attendees”).

10 minutes before the show starts, Log in to Zoom and do a sound check and a quick technology check with the performers.

The ‘Waiting Room’ is a feature in Zoom. When people enter through the link, they see a temporary event page. After making sure that all is in order, let everyone in. Throughout the show you’ll see people reappear in the waiting room and you’ll need to let them in manually. That’s why it’s good to have a friend who can help with moderation and let these new people (or returning guests) in.

After I started the show, I asked attendees to unmute themselves and enable their cameras. When 10 people unmuted themselves, the show became way more fun. Comics could tell if their jokes were landing. Also, audience members enjoyed seeing each other.

Zoom has a "Spotlight" feature. You can spotlight comics when they perform, so people know who’s performing. And then switch the spotlight to the next comic.

Throughout the show, you may have to mute noisy audience members. You’ll also have to shift the spotlight to different comedians. I highly recommend asking someone else to help you moderate if you’re busy hosting the show.I asked a friend to help me moderate.

Agree on a system to "light" your comics. You can’t just light them with your phone-screen. I asked them to watch their phones for a text that read “2 minute light!”

To give the show more polish, it's good to have some advanced audio. I used a Sure SM58 mic connected to my MacBook Air through a Scarlett 2i2 interface. One other comic had the same setup and sounded fantastic. The other comics used prop mics (one held up a pen). With a good microphone, you will sound like a god.

I used the built-in camera of my MacBook Air. With some lighting and a beautiful background, the picture looked almost professional. I’ve ordered a separate camera for future shows (link)

Double, triple, quadruple check that all performers have a good WiFi connection. The few comics who used their phone’s LTE/4G sounded terrible.

Online shows aren't perfect, but are surprisingly effective at recreating the feeling of a live comedy show. In fact, the format introduces some new opportunities for laughter.

Chris D'elira is very excited about Zoom comedy shows, and he used the picture from this post for his podcast, in order to ask me to be on my show in a very subtle way. He just call Zoom shows "podcasts".

You can read my new post about comedy-in-zoom that includes videos:
Live Stand-Up Comedy Works On Zoom And I Have A Video To Prove It 🚀

Good luck, and send me your ONLINE Netflix special once you make it big.

If you want to check out my next Comedy vs. Nerds show, use a code "COMEDYBLOG"

If you have any questions, suggestions, please reach out to me!

Michael Makarov is an NYC-based comic and a software engineer. He started his standup journey in 2014 in San Francisco, he sold out his first show in 30 minutes when the link made the top of Hacker News. Russian immigrant, he also speaks fluent Japanese and enough chinese to order food at restaurants. He runs Comedy vs. Nerds and Comedy Conspiracy, a standup comedy show about the internet. Other articles: 7x7 article